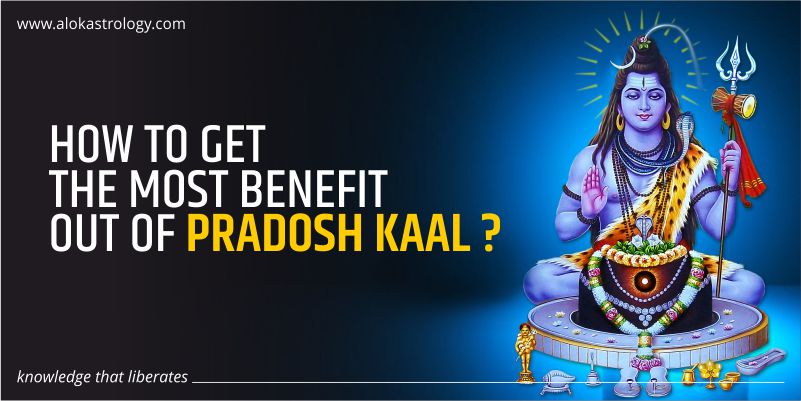 Pradosh Vrat (Pradosh Kaal) is observed every month on the Trayodashi Tithi of Krishna Paksha and Shukla Paksha, according to the Hindu calendar. Lord Shiva is worshipped on this day by his devotees. Worshiping Lord Shiva and fasting on Pradosh fulfill all of the devotees’ requests and bestows them with prosperity, good health, and happiness.

Know about the benefits of Pradosh Kaal. Get an online astrology consultation by the world-renowned Astrologer Mr. Alok Khandelwal.

Pradosha, as the name implies, has two meanings. The first literally means “elimination of sins,” and the second is the sunset period, also known as the Godhuli, which lasts roughly 3 hours. This period is separated into 90 minutes before and 90 minutes after sunset and is known as the Pradosh Kaalam. Lord Shiva and Maa Parvati satisfy all the demands through fasting and meditation with complete devotion and commitment. According to Shiva Purana, Lord Shiva and devi Parvati conduct a Holy Dance on Mount Kailash during the Pradosh Kaal. Offering puja during this period allows us to purge any negative Karma and fulfill all of our goals.

What to consume during this time?

After taking a bath in the morning, devotees might have milk. After that, make a fasting vow. After worshipping Lord Shanidev, one can consume fruits throughout the Pradosha time.

Every human being, regardless of age or gender, can do the Pradosh vrat. On this day, the Nataraja avatar of Lord Shiva is worshipped in several regions of the country.

People celebrate the Pradosh fast on the 13th day of the lunar calendar, also known as the Trayodashi tithi…most widely known as the maas Shivratri, of the Krishna Paksha and Shukla Paksha, according to which Pradosh comes twice a month. Pradosh, as the name implies, has two meanings: first, it literally means removal of sins, and second, it refers to the Dusk time, also known as the Godhuli…a time period of around 3 hours, divided into 1.5 hours before dusk and 1.5 hours after nightfall…that is known as the Pradosh Kaal.

As we all know, during Samudra Manthan, Lord Bholenath took the venom that came out with the Amrit, and Ma Parvati put Her hand on His neck to prevent that terrible poison from entering His body, which transformed the color of His throat blue, after which Bholenath was also known as Neelkantha. Following that incident, the Devas and Asuras received the Amrit, bringing fresh life to the cosmos. In their joy and celebration, they all neglected to thank Lord Shiva. However, on the thirteenth day (Trayodashi), they recognized their error and begged for compassion. Lord Shiva pardoned them, and the festivities resumed. That period is said to have been Pradosham. As a result, whoever prays to Shiva during this time will have his or her prayers granted and will be saved.

According to the Shiva Purana, Pradosh Vrat is the most beneficial fast for obtaining health, prosperity, and offspring. The Pradosh Vrat cleanses worshippers of all past and present sins. Lord Shiva and Maa Parvati satisfy all of the requests by following Pradosham with complete devotion and sincerity. It is said that during the Pradosh Kaal, Lord Shiva and Ma Parvati dance a Holy Dance on Mount Kailash in a happy mood, and hence performing puja at this time allows for the removal of negative karma and the fulfillment of all desires.

It is stated that lighting a single deep or even traveling to the adjacent Shiva temple for darshan during the Pradosh Kaal is enough to satisfy Bholenath.

People who fast on the Pradosh Tithi not only receive all earthly delights, but they also gain escape from repeated births and rebirths.

There are many sorts of Pradosh vrats based on the weekday they fall on, each with a particular meaning and benefit of fasting, and they are as follows:

When Som Pradosh occurs on a Monday, the devotee is blessed with good health and the fulfillment of all his requests.

Bhaum Pradosh, which occurs on a Tuesday, heals ailments and bestows good health to the devotee.

Wednesday Pradosh grants the wishes of a fasting person.

Guru Pradosh, which falls on a Thursday, aids the devotee in getting rid of both visible and invisible adversaries.

Shani Pradosh on a Saturday is extremely auspicious and is celebrated for achieving a happy and blissful married life. People who are childless should practice a sacrifice on this day and they will be rewarded with a baby by the Grace of Gauri Shanker.

How to get the most benefit out of Pradosh kaal?